What City Do You Belong In?

I have only been to Paris once. And I fell in LOVE.

This has to be one of the most beautiful cities in the world.

I love the fact that you could be in such a large city, yet, as you walk down a cobblestone street in some smaller neighborhood, munching on a baguette, you feel as if you're in a small town with loads of character.

Our trip to Paris was a spontanous surprise from my husband. It was a bleak February day when he asked if we had any plans for the weekend. Not having any, he then informed me that we would be going to Paris for a long weekend.

He had gotten on the internet and arranged for our hotel-Hotel Hospital Due.
Three stars (uhum, according to the web-site).

We arrived in Paris and took the train from the airport to our destination. It was to stop at the street corner where our hotel was located- directly in front of Notre Dame Cathedral. A most beautiful location.

As we came up from the underground we looked around for our Hotel. Not finding it we asked a police officer and he pointed in a direction towards the cathedral. We headed that way and not seeing it we walked around the block. Seeing as our French is almost non-existent we assumed that we misunderstood where he was sending us. Thinking that the entrance was around the back of the building in which direction he pointed, we strolled around looking for a hotel.
Finding none we walked back around to the front of the building and entered hoping to get some information.

What we had entered was a very large hospital. Approaching the information desk we asked if they knew the location for the hotel. But of course they did! We were to take the elevator up to the third floor, go down the long hallway to the right and there we would find the entrance...to our hotel.

Yup, our very first romantic trip to Paris we stayed in a hospital.

The worst part was having to pass gurneys with patients hooked up to I.V.'s on our jaunt down the hallway.

What, was he kidding me? I imagined staying in a quaint little hotel with French Provincial furniture- possibly heavy drapings around the bed- with a little balcony with wrought iron railings and a beautiful french door that I could fling open in the morning sun.
What I got was a room on the third floor of the social hospital with only skylights for windows and paper thin walls. I must admit it was the CLEANEST room I've ever stayed in.

Our view was- if you stood on the bed and jumped up and down- of the gargoyles perched on the roof of Notre Dame. Best view in town, right?

Once we got out into the street I got over my initial disappointment at our lodgings. Allen offered to find us another hotel, but who wants to waste time running around when there was so much to see. Therefore, we stayed where we were.

Oh! the sights to behold. Our first evening we spent at the Musee d'Orsey. The collections that it houses is truly amazing to me. all of those priceless paintings in one location.

The next few days were spent at The Louvre- gazing upon the Mona Lisa and Venus de milo.
Taking a lovely train ride through the countryside to Versaille- A most impressive dwelling with extensive gardens. But, best of all was the town of Versaille with it's cobbled streets and small quaint shops and patisseries. I was in heaven.
Then taking in the sights and the steep hill in Montmarte to look at the Cathedral and the sidewalk artists.
Strolling along the Seine one evening I commented to my husband that the French were unabashed romantics. With couples often stopping to embrace and partake in long passionate kisses. That was his cue to do the same with me. He took me in his arms and planted a long, wet, passionate kiss on my mouth.
When we stopped our shameless display of public affection a lovely, sweet young couple approached us asking for directions to the Eiffel tower. The young man explained that he and his girlfriend were getting engaged that weekend and he wanted to propose at the eiffel tower. He seemed so excited and engaged us in a long conversation with ever-increasing enthusiasm. During the time of this conversation (where we were all talking and congratulating and laughing) his girlfriend was robbing me of my wallet AND passport. This, of course, I did not notice until they had to run off to catch their train.
It took me about 15 seconds to realize what had happened. But by then, of course, it was too late.

Running back to the hospital (er, hotel)-seeing as it was after 8 pm the front doors to the hospital are locked and we had to gain access to the hotel via the Emergency room.
We called all of the credit card companies and the American consulate to report the robbery. All in all it was not too much of a hassle for us to leave the country and gain access back to the states. Of course this was well before 9/11.

Believe it or not it did not ruin the rest of our trip. I was actually more relaxed when we were out and about seeing as how I had nothing left for pickpocketers. I had a new sense of freedom and behaved much more recklessly than had this not happened.

I cannot wait to go back. 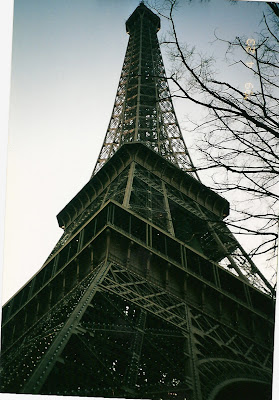 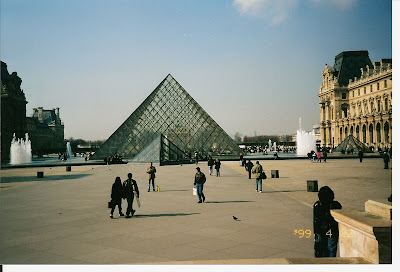 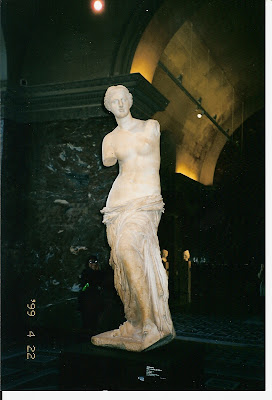 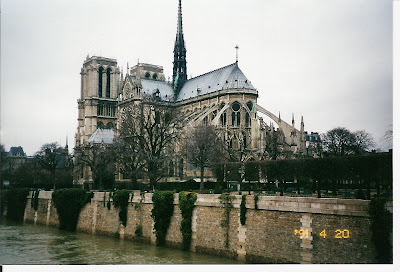 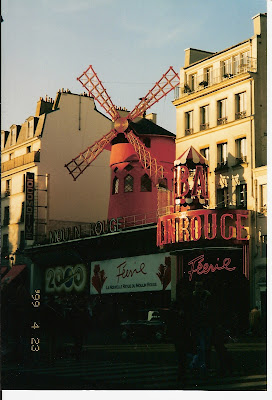 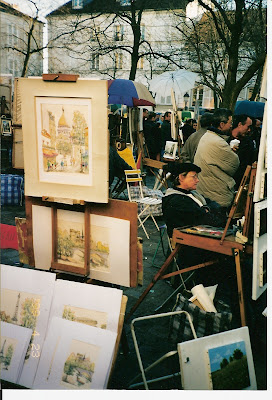 A sidewalk artist...but of course I had to buy something. 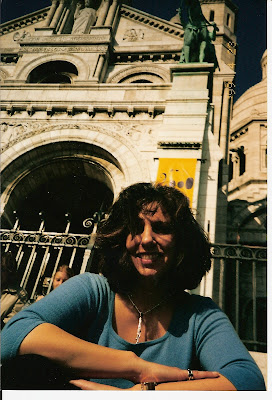 Me sitting on the steps of Sacre Coeur cathedral in Montmarte...a beautiful, warm February day. 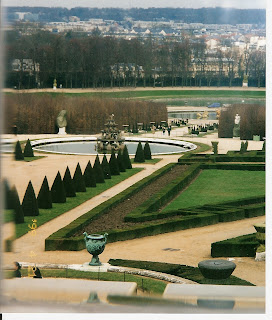 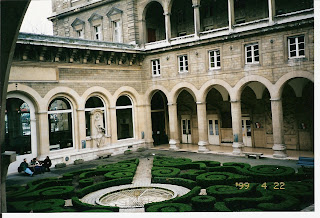 And finally the courtyard of our hotel.

If you are lucky enough to have lived in Paris as a young man, then wherever you go for the rest of your life, it stays with you, for Paris is a movable feast.
Ernest Hemingway
Posted by GEWELS at 4:25:00 PM

i wish i could say my memories of paree were as gay ..... unfortunately, paris was the last stop on a month long 'back pack around europe / youth hostel' college trip with a boyfriend. i suppose you could liken it to today's popular tv show: the amazing race.....by the end of the trip, it was OBVIOUS that we were NOT meant to stay together........

sadly, what i remember of Versailles is having a tremendous argument in front of a large group of Japanese tourists. I took the train back to paris alone. Don't ask me how i managed to find our hotel ....... sheer dumb luck, youthful ignorance and just plain ole mulish behavior !!!!

paris was wet and dreary; my relationship was definitely over; and the shop girls were incredibly rude (even with my school girl french ....)

I did the test and I belong in Rome - I haven't been yet but I intend to!

What a 'memorable' time you had in Paris! I'm so glad the 'pickpocket episode' didn't spoil it all for you, I would have fretted for the rest of the break!

KittyKat- Aww, too bad! You must go back with somebody nicer.
And, we were rather fortunate and didn't find the French unpleasant in the least. Even the pickpocketers were SO friendly.
Akela- It was a little bit of a hassle at the airport coming home, but other than that, like I said- I didn't worry about having my stuff stolen any longer and relaxed.

And all was so worth it to see the Mona Lisa

Clean Hotel Rooms, friendly pick-Pockets, IV's in the hallway...
Man, you are hilarious!

Whoah, sounds like a lively trip...glad the 'setbacks' didn't get you down!

I don't know if everyone has this problem, but the first 7 of your pictures aren't showing up for some reason?

What I really came over to say was thanks for your 'good thoughts and positive energy'... it means a lot!

Annelisa,
The photos all showed up yesterday. I'll try to repost and see what happens.
Thanks for the visit all!

Great to read the account of your stay in my "adopted" city. Glad to hear that the "hotel" and pickpocket did not spoil your love for this great city.

Hope you can come on back someday!

Hi Gewels,
Thanks for reading my Assisi post. I noticed this Paris one when I came over to do Photo Hunt.
These are great photos. I've been to Paris three times. It's a very special city, lovely buildings. I just told a friend who is going for the first time next week not to miss the Musee d'Orsay, one of my favourites anywhere. I also told her to go to the Cluny too and Versailles.
My duaghter teaches French and every second year takes 30 kids to France for two weeks, some of it in Paris. Now she knows all the good spots!

I've never been and I doubt I shall. I'd love to shop for interesting clothes, buy elegant perfume and sit in cafes eating croissants and sipping cafe au lait!

Great post. It transpoted me back to 2 of our visits to Paris. On the first, my backpack was stolen at a lovely cafe where we sat outside in Montmartre. Inside were our plane tickets and my passport and my daughter Rachel's passport. We spent a fine Monday morning at the U.S. embassy.

We had our 2nd visit just this last October after 2 wonderful weeks in Provence. Although I still loved Paris andwe had a marvelous time, it was believe it or not, a bit of a let down after Provence (I guess anyplace would be). We stayed at a lovely small hotel on Isle St. Louis. We can give you the details if you ever go back.

p.s 2 check out Looking's posts about Paris and PRovence

Oooooh! How did I miss this post in my absentia from Blogging last week? This makes me want to be transported to Paris, the best city in the whole world!