Wow, I CANNOT believe that I have not written one single solitary post since last March. Where HAS the time gone?
I am going to try and get on here more often and post more photos, write more paragraphs, and belly ache a lot more.

Lots has happened since March.
My Mother became deathly ill.
I quit my job.
Had my first encounter with plastic surgery.
Moved a son back home WITH his cat and 2 dogs.

All of which I will try to write about when the time seems right.

For now, though, I have been trying to keep my food blog updated a bit more. Since quitting my job and my Mother's health returning a bit I have a tad more time for photography and cookery. If you have not visited my food blog visit it here Imagined Eating. Feel free to leave comments, correct my recipes, add your own recipes and make requests. I would love to see more visits and contributions.

For now, I love you all and have missed each and every one of you.
Smooches
Gewels
Posted by GEWELS at 6:01:00 PM 43 comments: 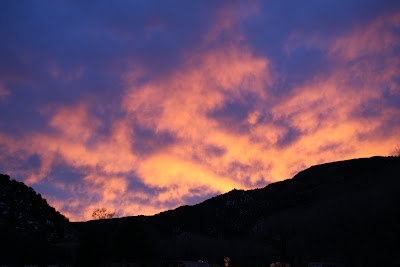 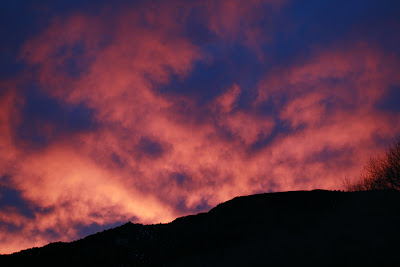 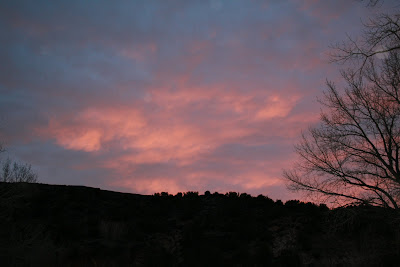 Oh, santa fe
Do you need it
Can you feel it in the same old way
I can feel it when it all goes down
Look around and it’s happening
Look around and see what I have found
And it’s more than a song to sing
In the night I hear you callin’
And I’m thinkin’ of you, darlin’ 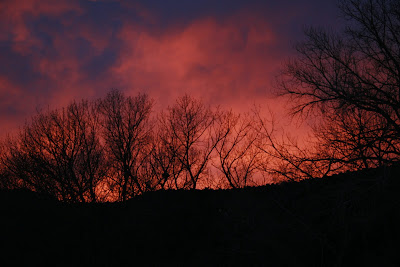 Diary of a demented snow shoveler 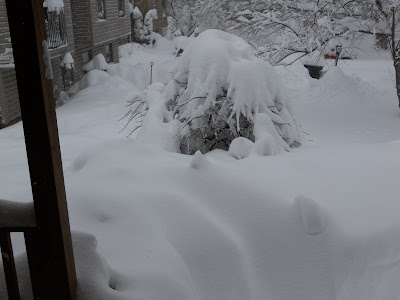 It started to snow. The first snow of the season and
the wife and I took our cocktails and sat for hours by
the window watching the huge soft flakes drift down
from heaven. It looked like a Grandma Moses print. so romantic we felt like newlyweds again. I love snow!

We woke to a beautiful blanket of crystal white snow
covering every inch of the landscape. What a fantastic sight! Can there be a more lovely place in
the whole world? Moving here was the best idea I've
ever had! Shoveled for the first time in years and felt like a boy again. I did both our driveway and the side-walks. This afternoon the snowplow came along and covered up the sidewalks and closed in the driveway, so I got to shovel again. What a perfect life!

The sun has melted all our lovely snow. Such a
disappointment! My neighbor tells me not to worry-
we'll definitely have a white Christmas. No snow on
Christmas would be awful! Bob says we'll have so much snow by the end of winter, that I'll never want to see snow again. I don't think that's possible. Bob is such a nice man, I'm glad he's our neighbor.

Snow, lovely snow! 8 inches last night. The temper-ature dropped to -20*. The cold makes everything
sparkle so. The wind took my breath away, but I warmed up by shoveling the driveway and sidewalks. This is the life! The snowplow came back this after-noon and buried everything again. I didn't realize I would have to do quite this much shoveling,but I'll certainly get back in shape this way. I wish I wouldn't huff and puff so. 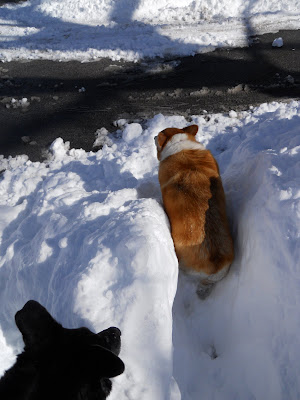 December 15
20 inches forecast. Sold my van and bought a 4x4
Blazer. Bought snow tires for the wife's car and 2
extra shovels. Stocked the freezer. The wife wants
a wood stove in case the electricity goes out. I think
that's silly. We aren't in Alaska, after all.

Ice storm this morning. Fell on my ass on the ice in
the driveway putting down salt. Hurt like hell. The
wife laughed for an hour, which I think was very
cruel.

Still way below freezing. Roads are too icy to go
anywhere. Electricity was off for 5 hours. I had to
pile the blankets on to stay warm. Nothing to do but
stare at the wife and try not to irritate her. Guess I
should've bought a wood stove, but won't admit it to
her. God I hate it when she's right. I can't believe
I'm freezing to death in my own livingroom.

Electricity is back on, but had another 14 inches of
the damn stuff last night. More shoveling! Took all
day. The damn snowplow came by twice. Tried to find a neighbor kid to shovel, but they said they're too busy playing hockey. I think they're lying. Called the only hardware store around to see about buying a snow blower and they're out. Might have another shipment in March. I think they're lying. Bob says I have to shovel or the city will have it done and bill me. I think he's lying. 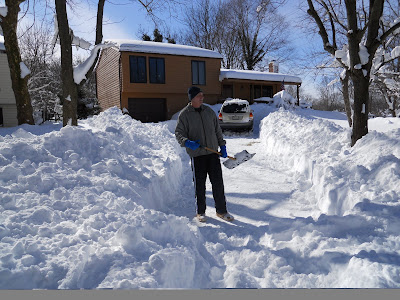 Bob was right about a white Christmas because 13 more inches of the white shit fell today, and it's so cold,it probably won't melt till August. Took me 45 minutes to get all dressed up to go out to shovel and then I had to pee. By the time I got undressed, pee'd and dressed again, I was too tired to shovel. Tried to
hire Bob who has a plow on his truck for the rest of
the winter, but he says he's too busy. I think the ass is lying.

Only 2 inches of snow today. And it warmed up to 0*.
The wife wanted me to decorate the front of the house this morning. What is she, nuts?!! Why didn't she tell me to do that a month ago? She says she did but I think she's lying.

6 inches- Snow packed so hard by snowplow, I broke
the shovel. Thought I was having a heart attack. If I
ever catch the son of a bitch who drives that snow
plow, I'll drag him through the snow by his balls and
beat him to death with my broken shovel. I know he
hides around the corner and waits for me to finish
shoveling and then he comes down the street at a 100 miles an hour and throws snow all over where I've just been! Tonight the wife wanted me to sing Christmas carols with her and open our presents, but I was too busy watching for the damn snowplow.

Merry Christmas! 20 more inches of the damn slop tonight - Snowed in The idea of shoveling makes my blood boil. God, I hate the snow! Then the snowplow driver came by asking for a donation and I hit him over the head with my shovel. The wife says I have a bad attitude. I think she's a fricking idiot. If I have to watch 'It's A Wonderful Life' one more time, I'm going to stuff her into the microwave. 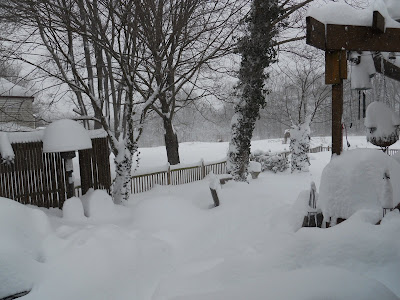 Still snowed in. Why did I ever move here? It was all HER idea. She's really getting on my nerves.

Temperature dropped to -30* and the pipes froze;
plumber came after 14 hours of waiting for him, he
only charged me $1,400 to replace all my pipes.

Warmed up to above -20*. Still snowed in. The BITCH is driving me crazy!!!

10 more inches. Bob says I have to shovel the roof or
it could cave in. That's the silliest thing I ever heard. How dumb does he think I am?

Roof caved in. I beat up the snow plow driver, and now he is suing me for a million dollars, not only for the beating I gave him, but also for trying to shove the broken snow shovel up his ass. The wife went home to her mother. Nine more inches predicted.

I set fire to what's left of the house. No more
shoveling.

Feel so good. I just love those little white pills
they keep giving me. Why am I tied to this bed?

And on that final note here is a shot of our deck trellis, which collapsed under the weight of the snow. More white pills please!!! 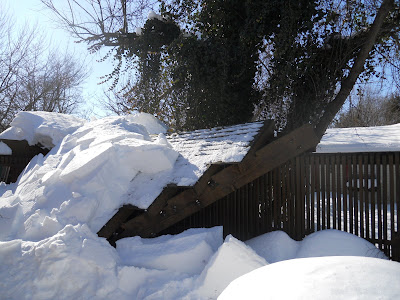 And Snow it Begins.

This has been a very unusually snowy winter. So far this winter we have had 79.9 inches of snow.
These are shots of the last two snowstorms that we've had which began last Friday evening. With only a 4 day break in-between. 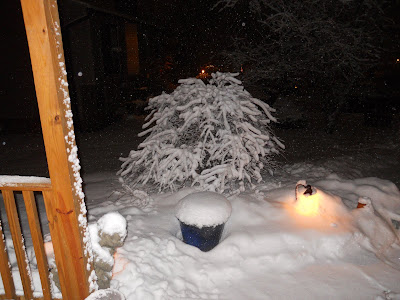 Whose woods these are I think I know.
His house is in the village, though;
He will not see me stopping here
To watch his woods fill up with snow. 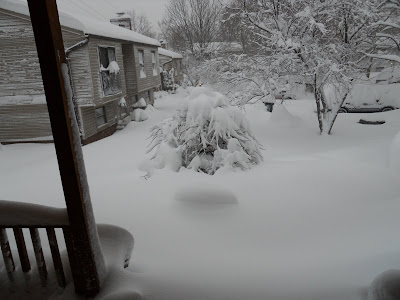 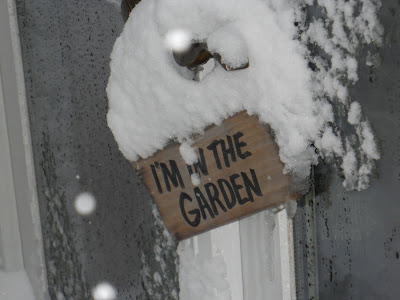 My little horse must think it's queer
To stop without a farmhouse near
Between the woods and frozen lake
The darkest evening of the year. 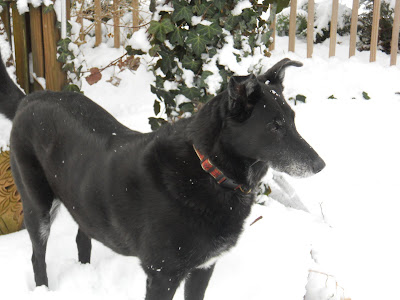 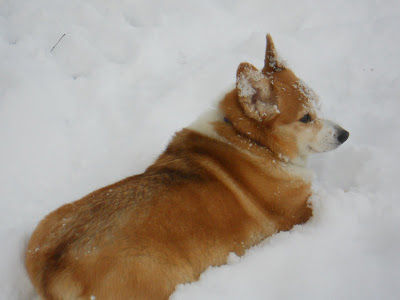 He gives his harness bells a shake
To ask if there's some mistake.
The only other sound's the sweep
Of easy wind and downy flake. 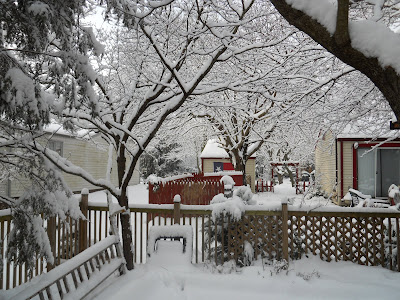 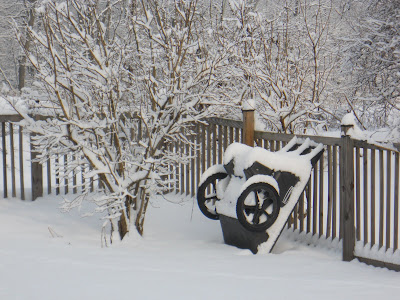 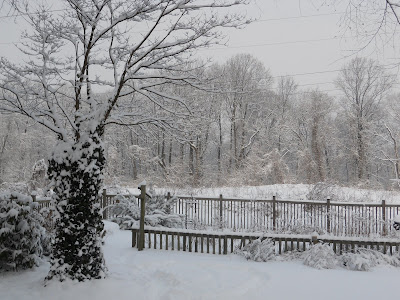