BACK IN THE SADDLE AGAIN

Well I finally went back to riding.

Thursday night was my first class since May 1st. Why? You ask.
Well, because on May 1st was the day that my horse, Comet, decided to buck me off.

It was almost a relief actually. Ever since I began riding ( one year ago) I would wonder at the start of every lesson if it will be the day that I fall off. And, up until May 1st it never was.

I must make it clear, however, that I did not simply "fall off" the horse. That would imply that I was an incompetent, unbalanced or unskilled rider. I am actually all of those things but they are not the reason that this unfortunate incident had occurred.

I must start by saying that is was very clear, from the moment that I walked into Comet's stall, that she did not want to play that day. I had never ridden her before and was not familiar with her rude behavior. She immediately came at me with her lips curled back and her teeth bared, pushing her face into mine. This, I thought, was going to be the day that I had my cheek bitten off by a horse.
As it turned out she was not in the biting mood, she was just trying to intimidate me into not tacking her. Well, it worked.
She ended up getting her bridle on by an 8 year old (little brat), who had no problem with her behavior. Oh to be 8 years old again- sigh.

We actually rode together rather well. She had a pretty little canter that was quite comfortable for me. I am so used to Valentine's canter- which is very bumpy, and brtutal on my bad back. Comet was like a rocking horse in comparison.

The problem came when we were asked to sit on our horse and then to turn around so that we were facing backwards. The instructor was then going to walk us individually around the ring. As soon as I turned around and got myself settled is when Comet decided that she had had enough and began bucking. With no reins, neck or mane to hang onto I was dumped onto the ground. The fall itself was not that bad. Comet is a shorter horse than Valentine so the fall was not as bad as it may have been had I been riding him.
I did manage to get back up on Comet, still bareback but frontwards this time, and take one more walk around the ring. 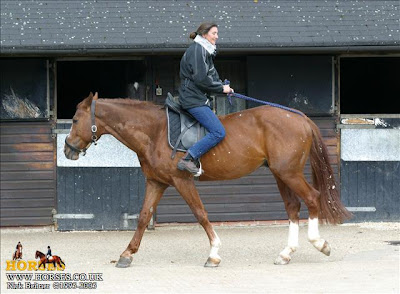 I did not realize at the time that I had fractured my elbow. I was in terrible pain and finally went to the emergency room at 7 the next morning. That x-ray showed no break. The only good thing about going to the emergency room was getting the percoset. A week later it was re x-rayed and the break was found.

The worst part was having to go to my son's wedding in Vegas with my arm in a sling.

It's on the mend, although I am still in some pain and in need of a little bit of therapy to get my range of motion back.

I am back in the saddle again and loving it. My first lesson back, after more than a month off, was with Comet- AGAIN! I wavered for a second but I did get back up on that rotten mare. She was so well-behaved this time I almost thought she was a different horse.

I was very nervous going back to class but the more I stayed away the more nervous I became. I know it will happen again- and may be much worse next time. But, as my chiropractor says "if you're going to live life things like this are bound to happen".

Here's to "living life" and taking the risk.

Hahahaha....Ol'Comet really knew how to time it....just wait till, she is sitting backwards not a thing in the world to hold onto...

I don't know how you had the nerve to get back on any horse. I would have been petrified for life!

I will relieve you of one arm-taxing dog on Monday AM. I'm sure you will not miss him when the thunder comes!

Hugs to you and Jakey!

Akela- I think it's more stupidity than bravery.
Steve- Her timing was impeccable.
Barbara- Oh, didn't I tell you Jakey's not going anywhere. We like him here. But you're always welcome to visit.

I feel your pain! You are one feisty and brave gal! Listen to your chiro!