The last 4 months have been incredibly busy for me. Not with anything that is making any money you see. But, with some amazing events which I have had a hand in producing.
January thru March are wedding show months. So, to entice new clients over the top vignettes must be produced. It's all about SELLING YOURSELF.
Here are a few photos of some of the displays which I've had a hand in designing.

The first is a sort of Moroccan inspired theme. This was done under a canopy of all pink, orange and lime green. I LOVE the combo of orange and hot pink. 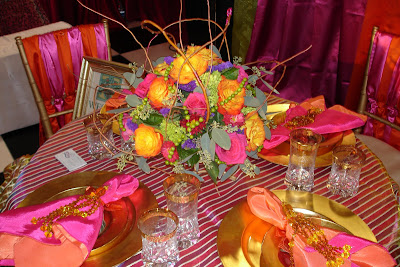 One vignette was more contemporary in a black and red scheme. 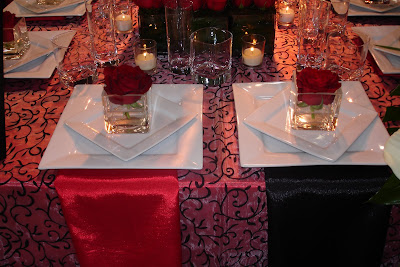 This next photo was not my design but the linens used were mine. I adore how they put the whole tablescape together using very elegant french tulips and river rocks. 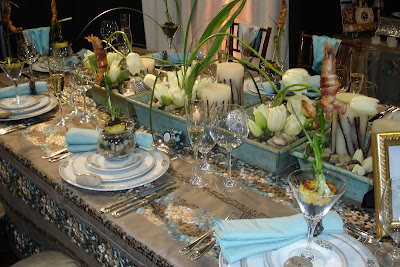 The next set of photos were from a Bridal show that we did the beginning of April. Each designer was given a separate room at The Tremont Hotel here in Baltimore. Each room was a different color-scheme or theme. My room was done in all shades of silver, purple and periwinkle blue. I was trying to create a very moody, but elegant space. The only thing missing was the smoke machine (the higher ups nixed the idea but later wished we had done it- go figure). 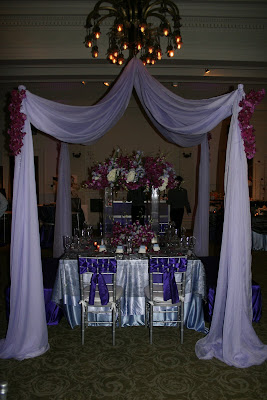 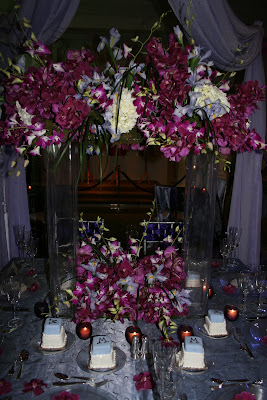 This last set of photos was for a fundraiser called UNCORKED- A five course wine dinner with proceeds going to the Maryland Food Bank. The theme of the affair was "A NIGHT AT THE MOVIES" and each table was designed by different florists, event planners or designers.
My movie was OUT OF AFRICA- and this is the result. I made a coffee tree for the center (since it was set on a coffee farm)surrounded by huge King Protea (the national flower of South Africa) and 3 foot tall giraffes that I was fortunate enough to find the day before the event.
I chose linens to evoke an elegant british safari feel. The base linen was a beautiful ecru lace topped with a natural burlap (much like you would find a coffee bean bag made from). Lace napkins, silver candlesticks and animal print covered bamboo chairs finished the design. Favors were bottles of South African wines wrapped in burlap and finished with raffia ties. 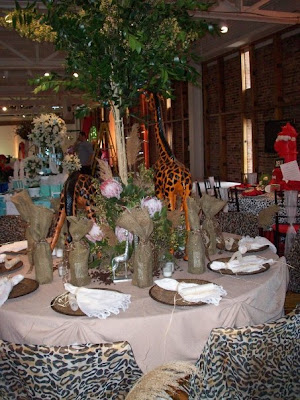 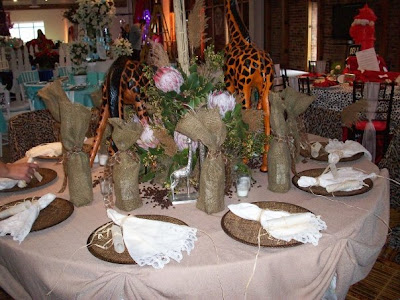 Other movies represented were Breakfast at Tiffanys, La Cage Au Folle, The Birds, The Dark Knight, One Flew Over the Cuckoos Nest (that was wild), Saturday Night Fever and many more. The creativity constantly amazes me!!!

The world is but a canvas to the imagination.
Henry David Thoreau


Unfortunately now I'm brain dead and have not one creative thought in my mind.
Posted by GEWELS at 9:33:00 AM

They're all SO pretty!

Wow, you've got real talent there Gewels! Amazing displays! I love the top one especially...but they're all brilliant...well done gal!

Wow, everything looks so amazing! I might have to ask you for suggestions when I start planning my wedding!

They are all amazing but my favourite is the first one!

These are wonderful presentations,a fact of which I am sure you are aware; nice work. I especially like the word "vignettes" used to describe the assemblages.

i'm partial to the orange and pink, myself.

As opposed to "tableau" ,I mean.

How fabulous and innovative!! WOW!